With hundreds of beaches on Cape Cod's 550+ miles of shoreline, how will you choose which ones to visit during your time here on the Cape? 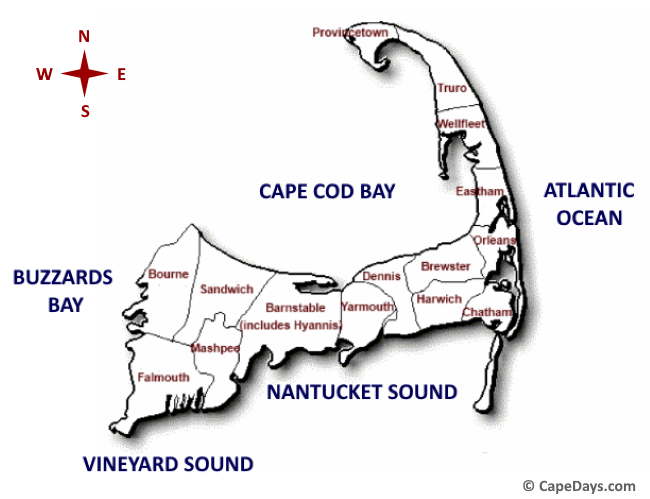 As you see, the Cape touches 5 different bodies of water:

About Our Ocean, Bay & Sound Beaches 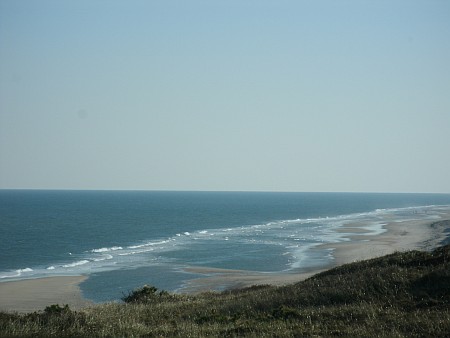 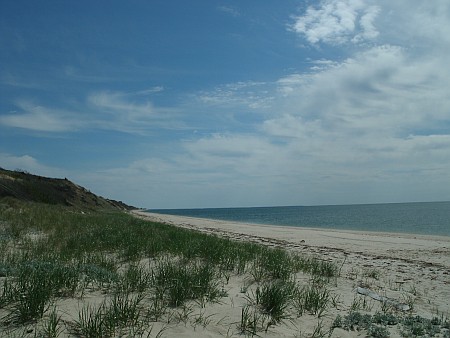 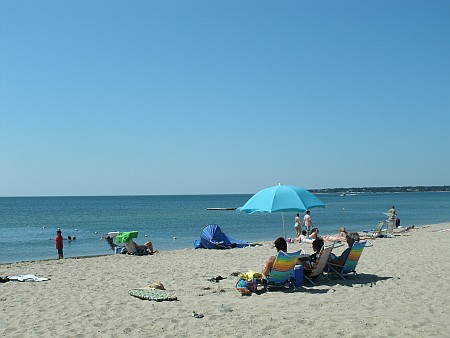 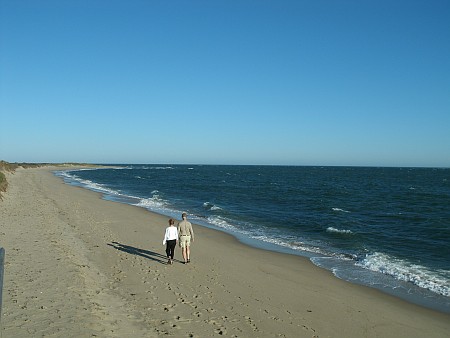 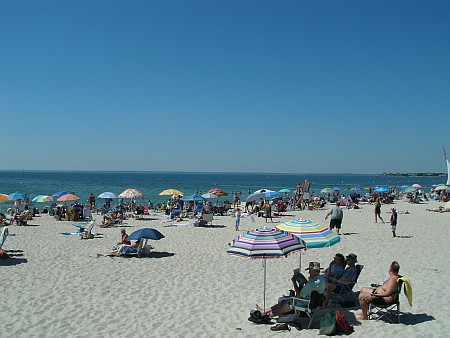 Our Atlantic Ocean shoreline has some of the most gorgeous scenery in all the world. And I'm not the only one who thinks so.

Check out the Top 10 ratings in prestigious travel magazines and you'll usually find at least one of our ocean beaches very prominently featured.

On the eastern shoreline of Cape Cod in the towns of Chatham, Orleans, Eastham, Wellfleet, Truro and Provincetown.

Waves are big and crashing at some of our Ocean beaches ... 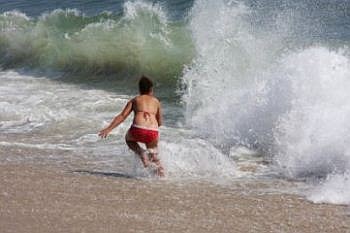 ... and a bit more moderate at others. 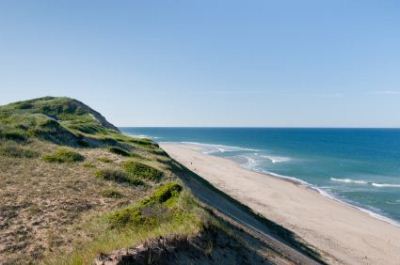 Cold! During the summer months, water temps might reach the low 60s. You'll find a little bit warmer water in tidal pools here and there.

Some Ocean beaches are wheelchair accessible. At others, there are wooden stairs from the top of a dune down to the beach. At a few, you'll have to hike through loose sand to get to and from the beach.

Most of the Atlantic Ocean beaches are within the Cape Cod National Seashore. That's 40+ miles of federally protected land and coastline with lighthouses, walking and biking trails, historic sites, nature preserves, and breathtakingly beautiful scenery.

Beach camping and small campfires are allowed at some of our Ocean beaches, too!

Beachcombing, long walks with your sweetheart, tidal pools for the kiddies to splash around in, and sunsets that'll take your breath away. The allure of our Cape Cod Bay beaches just goes on and on!

On the northern shoreline of Cape Cod in the towns of Sandwich, Barnstable, Yarmouthport, Dennis, and Brewster, and on the western shores of Orleans, Eastham, Wellfleet, Truro and Provincetown.

Surf is usually quite mild, good for all ages and swimming abilities. Waves do build up a bit more when there's a storm offshore.

Chilly, but not anywhere near as cold as the Atlantic Ocean. Water temps reach the upper 60s to low 70s in the summer. Tidal pools and creeks hold even warmer water.

There are stairs at some beaches and wooden boardwalks at others. Many Cape Cod Bay beaches are easily accessible by all. 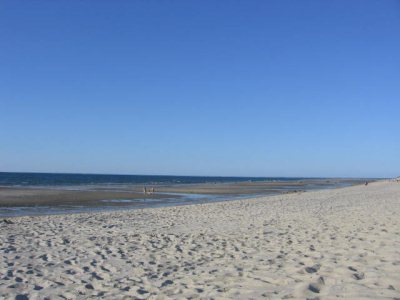 When the tide goes out on the Bay, it goes OUT ...

Leaving miles and miles of sandflats to walk, jog, fly your kite. And hundreds of tide pools to explore for pretty shells and little sea critters, as the Bay waters recede.

Low tide is also the perfect time for a game of beach bocce - a favorite pastime of Cape Cod locals and visitors alike! 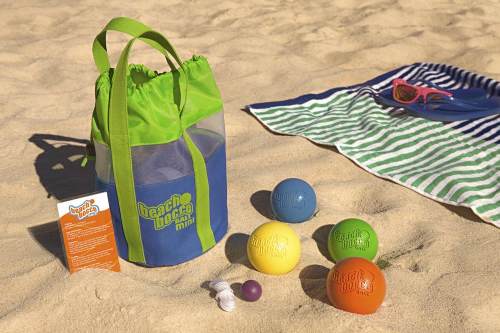 Tide Tip: When the tide turns and starts coming back in on the Bay-side beaches, the water level rises much more quickly than you can imagine. If you're too far out on the sandflats when the tide turns to incoming, you might be in over your head before you know it.

It's a good idea to print out a daily tide chart, and keep it handy in your beach bag!

On the western and southern shoreline of Cape Cod in Falmouth, Mashpee, Hyannis, Yarmouth, Dennis, Harwich and Chatham.

Mainly medium texture, off-white to tan sand. A few Sound-side beaches have pebbly tide lines with shells and some seaweed in spots. (Mostly the "clumpy" seaweed ... not much of the yucky gooey stuff.)

Hardly any waves, except when it's very windy. Even then, the surf is still relatively gentle.

The water temps at these beaches are "swimmable" from June to September, and often reach the mid-70s in July and August. We have a friend who swims in Nantucket Sound from early May to late October. (She's nuts, IMHO!)

Some beaches are accessed by stairs, but most are quite easily accessible by all.

I might be a little biased on this one. I'm a big fan of warm, calm water and hanging out on the beach with the latest Brad Thor novel.

Nantucket Sound, Vineyard Sound and Buzzards Bay beaches are perfect for that. And for kids to play with their beach and water toys, without mom and dad having to worry about a big wave coming along washing them off to Spain!

Paddling on the Sound 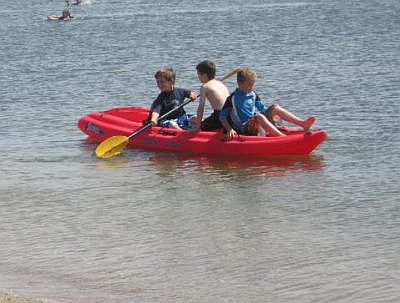 The Best Wheelchair Accessible Beaches on the Cape