Cape Cod Gateway Airport in Hyannis (airport code: HYA) is our local hub for air travel to the Cape and the nearby islands of Nantucket and Martha's Vineyard. 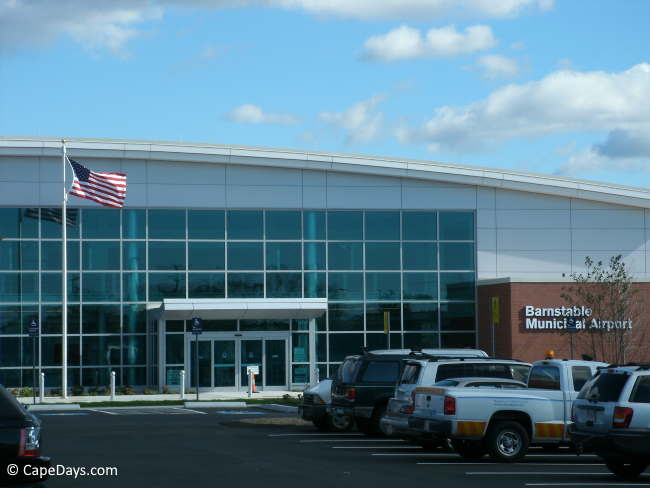 At Cape Cod Gateway Airport you'll have all the conveniences with none of the "big city" airport hassles.

No long shuttle rides to the terminal. No long treks to baggage claim. And no problem finding your ground transportation.

Everything is right there for you at the Hyannis airport terminal!

What Airlines Fly to Hyannis, MA

[*Note: As of this writing, I haven't been able to determine when Southern Airways Express's HYA-ACK service will start and end in 2021. I'll update here as soon as I know.]

Rental car companies are on site at the airport as well as off-site just a short distance away:

Check rates on rental cars at the airport and nearby ...


Taxicabs pick up passengers outside the front door to the terminal.

Tip: To assure a taxi will be waiting for you, call before you arrive. Let them know what time you'll be landing, and arrange for the cab to be there when you step out of the terminal.

If you're planning to head from the airport straight to the bus station or ferry pier in Hyannis, the quickest and easiest option is to grab a cab.

It's less than a 2-mile taxi ride to Hyannis Transportation Center for regional bus service, and the same distance to HyLine and Steamship Authority piers for ferries to Nantucket and Martha's Vineyard.

Driving Distance From The Airport To ...

To give you a sense of how far it is from Cape Cod Gateway Airport in Hyannis to other towns on the Cape, here's a chart with the approximate mileage:

Note: Hyannis is in the town of Barnstable - a large town, geographically speaking! So your driving mileage from the airport to your final destination in Barnstable could be anywhere from less than 1 mile up to 5+ miles.