Meteor showers in the Cape Cod night sky. Super moons on the horizon. Lunar eclipses turning the moon dark. It's all happening this year! 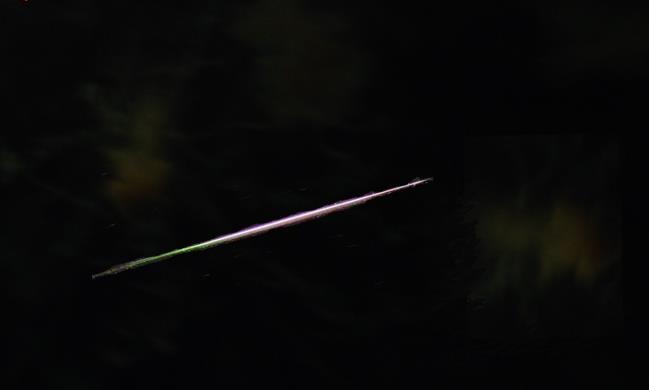 Yes, this is a chilly one! So bundle up and grab a thermos of hot cocoa to take with you if you're going out on meteor watch.

The moon won't hinder viewing this year. So if Mom Nature gives us a cloudless night, we might be able to see big, bright fireballs streaking across the sky.

The Lyrids are somewhat unpredictable. Normally, the Lyrid meteor showers only produce a few visible meteors per hour. But on a good year, the rate might rise to 100+ per hour.

For this year's sky show, the moon will only pose a little interference. If you can roust yourself from bed at that hour, head out for excellent viewing in a (hopefully!) cloud-free sky.

This is one of the best known, most-watched meteor showers of all ... and my personal favorite for a couple reasons.

Second, and maybe most importantly - it's warm here in August. It's a wonderful time to be outdoors gazing up at the stars!

On peak night for the Perseids in 2022, the moon will be full, making it tough to see all but the biggest, brightest meteors.

The Draconids (a/k/a "Giacobinids") meteor shower is usually a pretty sparse event with only a few sightings each hour. But on rare occasion, it produces a magnificent display.

The Draconids are mostly seen in the evening hours shortly after dark, so there's no need to get up in the middle of the night to see them. The quarter moon will obscure the more faint meteors this year. But who knows, we might see some good ones anyway!

With only a few sightings an hour, this is one of the annual sky events that I don't bother setting my alarm clock for.

This year, the moon will be just a skinny little sliver in the sky. So if you're going to be awake before dawn anyway, it can't hurt to take a peek outside. Who knows? You might be lucky enough to see an Orionid fireball or two.

In 2001 the Leonids produced the most breathtaking display I've ever seen!

At one point during the night, almost everyone in our neighborhood was on the beach, braving unseasonably cold conditions, watching hundreds of shooting stars flashing through the sky.

That's a rare occurrence, though. The Leonids usually put on a much more subdued performance.

Unfortunately, in 2022 the moon will be a hindrance to viewing most of the night, finally setting just before sunrise. If you're an early riser, it's worth taking a pre-dawn peek for some  breathtaking meteors.

This is usually one of the best meteor showers of the year with the brightest Geminids sometimes showing colors of blue, yellow or green.

For most of the night, viewing will be a challenge thanks to a bright moon that will rise in the early evening. But if you happen to be outdoors on the night of December 13-14 (especially in the pre-dawn hours), it's definitely worth looking to the sky to see if you can spot some Geminids!

Where to Watch Meteor Showers on Cape Cod

The best viewing spot for meteor showers is as far away as you can get from bright lights.

On Cape Cod, that means almost anywhere is good ... except the more commercial areas of Falmouth, Mashpee, Hyannis, Orleans and Provincetown.

My recommendation? Scout out a few possible viewing locations the night before the shower so you'll know where it's darkest.

Two lunar eclipses will be visible on Cape Cod - and across most of  North America - in 2022. 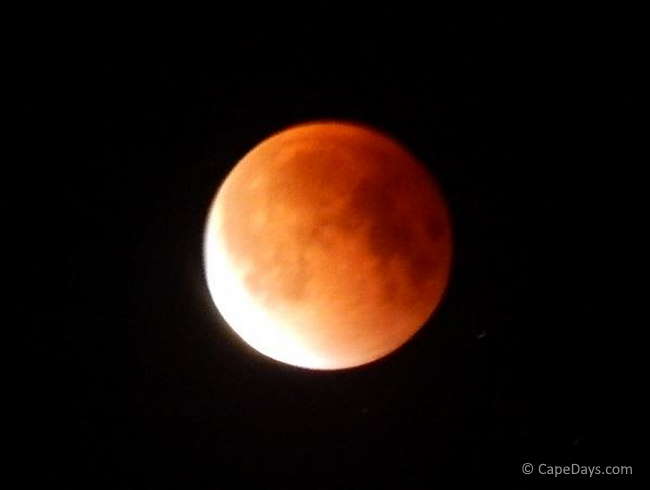 This total lunar eclipse is an extra-special sky event because it comes on the night of a "full super moon" - a time when the moon is nearest to the Earth at the same time it's full.

The eclipse begins during late evening on May 15th and continues into the wee hours of May 16th.

Partial Eclipse Begins: Around 10:30 p.m. (EDT), the shadow will begin to cover the moon.

Total Eclipse Begins: Around midnight (EDT), the moon will be at its peak. A really cool sight to see!

Total Eclipse Ends: Shortly before 1:00 a.m. (EDT), totality will end, and the dark shadow will begin to move off the moon.

Partial Eclipse Ends: By 2:00 a.m. (EDT). All visible signs of eclipse will be gone.

The second total lunar eclipse of 2022 begins a few hours before the sun comes up. Early risers: this one's for you!

Partial Eclipse Begins: Around 4:00 a.m. (EST), the shadow will start.

Full Eclipse: Totality officially begins a little after 5:00 a.m. (EST). The moon will stay in total eclipse until just before 6:00 a.m. (EST).

Moon Set: The sun will begin to rise over Cape Cod, and the moon will set, around 6:30 a.m. (EST) on the morning of the eclipse. Just in time for breakfast! ;-)

No matter where you are on Earth, you can watch the International Space Station (ISS) pass overhead. Telescope not required!

Click here to find ISS viewing times near you

There will be three more super moons this year. Here are the dates and the nicknames given to them:

For each of these events, the moon will rise on Cape Cod in early evening and set an hour or so before dawn. 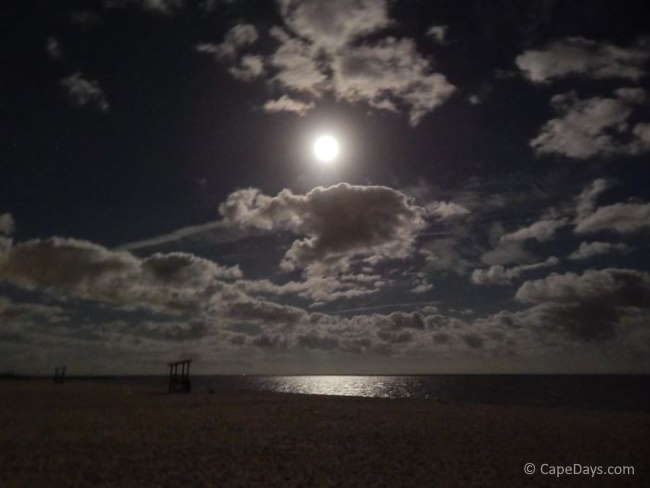 Super Moon Over Seagull Beach a Few Hours After Sunset
(Moonlight so bright I could see colors on the beach!) 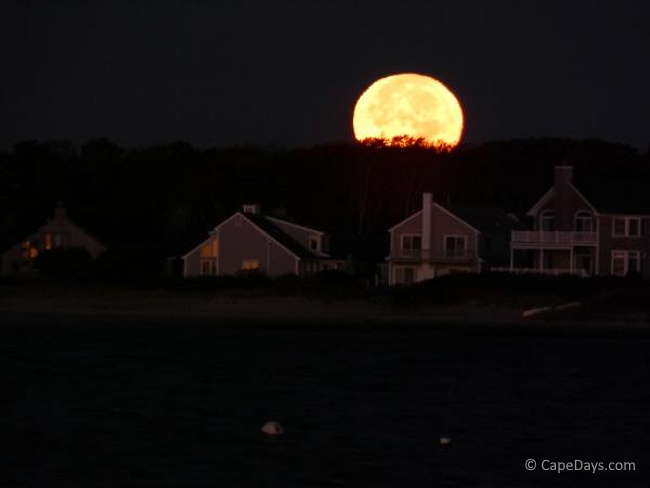 Super Moon Setting On Nantucket Sound Just Before Dawn
(All I can say is, "Breathtaking!")

Want to see the stars shooting over the ocean? Consider staying somewhere on the waterfront:

Sky Watching at the Beach: What To Bring

Local astronomers set up telescopes and invite visitors to gaze through the lens. These friendly, knowledgeable folks are happy to share their wealth of knowledge about the stars, the planets, and pretty much anything else you'd like to know about the night sky.

The Star Parties are open to the public, free of charge.

*Update: May 2022 - CCAS Star Parties were suspended during the pandemic. I expect they'll start up again this summer, but I haven't been able to find out for sure.

As soon as I know more, I'll post it here. So please stay tuned!