Cape Cod Beach Pictures
Sandy Neck to Mayflower and Beyond

You've asked to see more Cape Cod beach pictures, and I'm happy to oblige with these new photos of some of our favorite beaches! 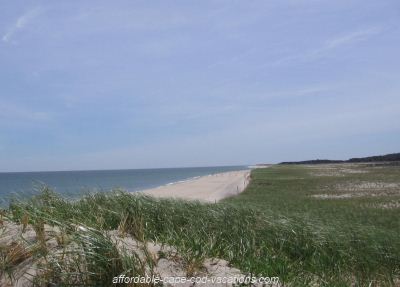 I took this photo at Nauset Beach in Orleans on a balmy day in early May.

If you go to the far end of the beach parking lot and walk along the sand path toward the ocean, this is the view that greets you just as you begin to crest the dune.

Nauset is an Atlantic Ocean beach, and a totally "Wow!!" spot.

Within about 3 seconds of seeing it in person, you'll realize why Nauset Beach has been voted one of the "Top 10 Beaches in the World  " by many prestigious travel publications. 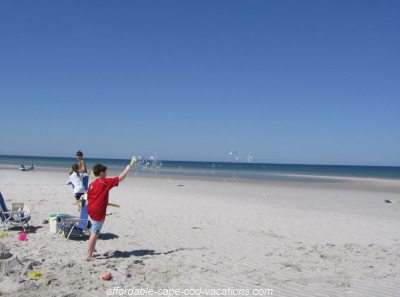 Mayflower Beach is one of the most popular beaches in the town of Dennis on Cape Cod Bay.

It's long and wide - with plenty of room to roam as you snap Cape Cod beach pictures for your vacation memory album.

And when the breeze is up just a teeny bit, there's a whole lotta fun in a bottle of "bubble juice".

FYI: You can buy bubble solution and bubble wands at souvenir shops and in the toy aisles at local supermarkets and pharmacies. Or have even more fun by making your own.

Be sure to visit my All-in-One Guide to Cape Cod's Beaches! 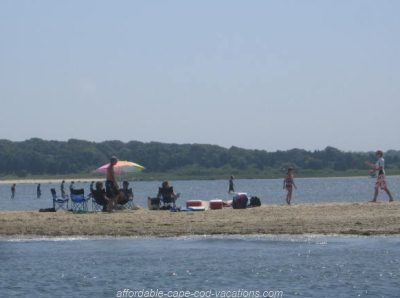 These pictures of Egg Island (above) and Sandy Neck (below) aren't technically photos of "Cape Cod beaches". They're photos of little islands of sand that appear and disappear with the falling and rising of the tide.

Egg Island  - For as long as I can remember, Egg Island has been a favorite with locals and visitors alike, for picnics, swimming and sunbathing.

How do you get there?

Boat across the bay from Hyannis, paddle your kayak over from Mill Creek ... or hitch a ride from the Kennedy Compound in Hyannisport with Arnold Schwarzenegger.

(Just kidding about the ride with Arnold. Since he and Maria Shriver split up, we haven't seen him anywhere near Egg Island. But this spot is a favorite summer hang-out for other members of the famous Kennedy clan!) 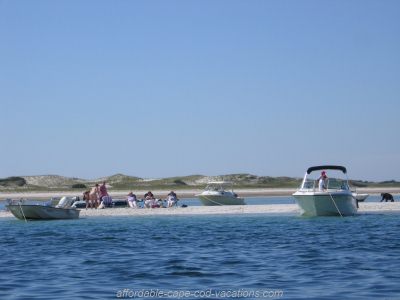 I took this photo down by the point, near the entrance to Barnstable Harbor. In this area, soft white sandbars pop up just offshore when the tide goes out. And with the summer sun high in the sky, the water sparkles a luscious Caribbean blue green.

If you walk Sandy Neck going northwest (from Barnstable toward Sandwich), have your beach shoes handy. It's pebbly, and it's a beachcomber's dream! 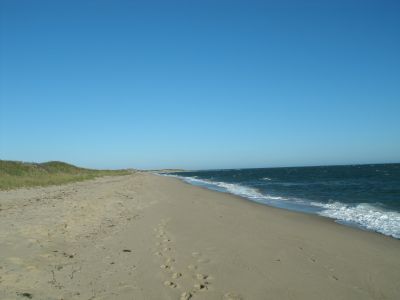 The footsteps on the sand along SouthCape Beach say it all.

This is one of our favorite walking beaches, especially in the off-season when we have the mile-long stretch all to ourselves.

During the summertime, we usually see South Cape Beach from a different vantage point - from out on the water, looking in toward the beach.

Those are the days we're cruising along, close to the shoreline, on the hunt for our favorite light-tackle catches: Striped Bass, Bluefish and False Albacore.

South Cape Beach is a little out of the way, at the end of Great Oak Road in Mashpee. But it's well worth the drive - or boat ride - to get there! 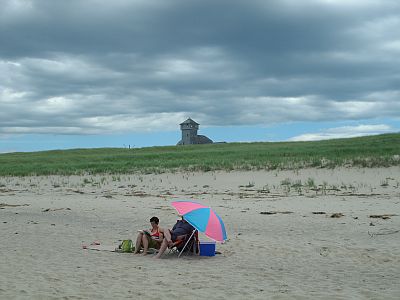 The stunning views, plus the possibility (likelihood!) of seeing whales breaching just offshore, make Race Point in Provincetown a favorite Cape Cod beach for photos, beach-walking, and hanging out with a good book.

As you can see in this pic,  there's a building in the background. That's the Old Harbor Lifesaving Station - an historic, 100+ year-old building that housed U.S. Life Saving Service and U.S. Coast Guard lifesaving equipment, until it was discontinued in 1944.

During August and September, the Lifesaving Station is open to the public from 2:30-5:30 p.m. On Thursday evenings at 6:00 p.m., Cape Cod National Seashore Park Rangers reenact the Beach Apparatus Drill - the heroic procedure once used to rescue mariners shipwrecked off the coast.