This classic New England fish chowder recipe was a favorite of one of Cape Cod's most beloved historic figures, Jacqueline Kennedy.

I found this 50+ year-old magazine clipping tucked into a cookbook I inherited from my mother-in-law, Grace. (I'm so glad she saved it!)

"This recipe, provided Reddy's News by Mrs. Jacqueline Kennedy, new first lady, is a favorite. It's a delightful dish your family might enjoy." (Unknown Publication - ca. 1961)

I've used black sea bass, tautog, or striped bass fillets from my days of fishing our Cape Cod waters. Any of those fish make a great chowder, too. 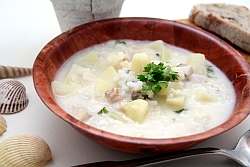 Get Everything Ready for the Pot

Pull out a sharp knife and dice your salt pork or bacon, slice the onions, peel and dice the potatoes (about 1/4" dice), and rough chop enough celery to make 1 cup chopped.

2. Remove fish from water, and set aside the cooking broth.

3. Check fish for any lingering bones and remove them.

4. In a dutch over or other large pot, saute salt pork/bacon until crisp.

5. Remove salt pork/bacon from pot, and set aside on paper towel.

6. Saute onions in the salt pork/bacon fat until golden brown.

8. Pour the fish broth into the pot, along with enough boiling water to make 3 cups (total) of liquid in the pot.

10. Add milk and butter, and continue simmering for 5 minutes.

To make a meal of it, ladle the chowder liberally into 4 portions.

Serve with cornbread or my other favorite "go with" ... 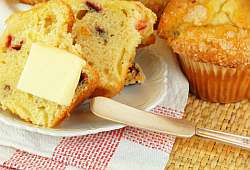 Photo Credit: Thanks to © Yvonne Bogdanski at Dreamstime.com for sharing her bowl of chowder with us!